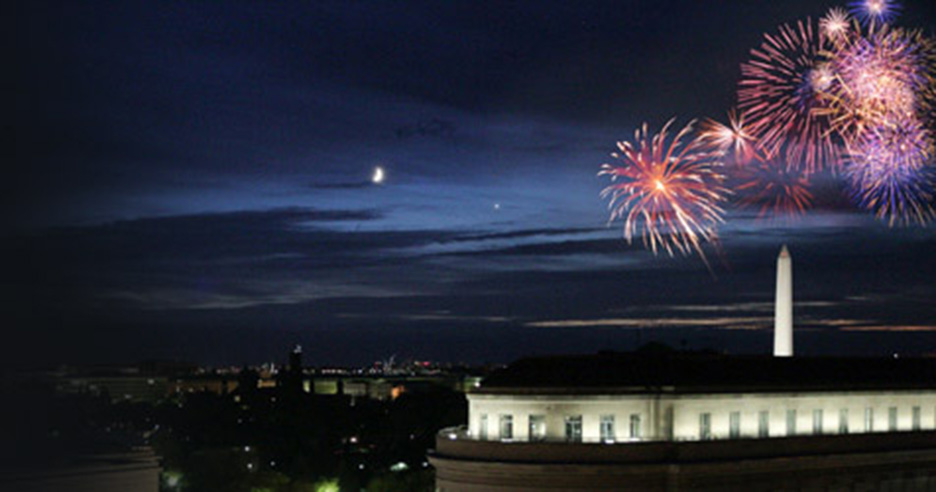 Spend Independence Day in the heart of Washington, D.C, at the Newseum for a casual rooftop dinner. Experience the spectacular fireworks show set against the iconic landscape of historic buildings and monuments, family friendly activities, and a storytelling visit with Patrice Olivon former White House chef to the Clinton and Bush families.  Your Fourth of July Newseum experience will begin in the afternoon and continue through the evening at one of the world’s most interactive museums, located on Pennsylvania Avenue, where five centuries of news history meets up-to-the-second technology and hands-on exhibits.

You will have the opportunity to spend time visiting the Newseum’s galleries, exhibitions, and theaters on your own during the public hours. In addition, a private thirty minute tour will be offered at set times to take you behind-the-scenes to the broadcast studios and control rooms for ABC’s Sunday morning news program, “This Week,” as well as other museum highlights.

When the museum closes to the public**, you will be able to continue exploring for an hour before moving to the Newseum's Knight Conference Center rooftop for a reception and the evening portion of your experience.

For dinner, guests will be treated to a casual red, white, and blue themed buffet with some of Chef Patrice’s favorite Presidential summer recipes and specialty food stations created by Wolfgang Puck Catering. Summer inspired cocktails will be offered at the premium bar as well as indoor-outdoor seating. For twelve years, Chef Patrice served simultaneously as the Executive Chef of the French Embassy and a White House Chef.  He’ll share stories and recipes during a lively Q&A and photo session.

Following his work at the White House, Chef Patrice was nicknamed the “Patrice-O-Matic” for his speed and culinary prowess when he and former White House Chef Walter Sheib won their Food Network’s Iron Chef America battle against Iron Chef Cat Cora.  Chef Patrice now serves as Program Director of the Culinary Arts at L’Academie de Cuisine in Gaithersburg, MD.

Later in the evening, all guests will have a great vantage point for the nation’s spectacular fireworks display and a virtual front row seat to the Independence Day concert as the televised event comes to life on large screen televisions with enhanced audio.

**Please note: After hours, all exhibits will be up and running with video and audio with the exception of Be a TV Reporter, Annenberg Theater, Orientation Theaters, Documentary Theater and Sports Theater.

***A detailed itinerary will be provided with event confirmation. All minors must be accompanied by an adult who has purchased the package.

Tickets are limited to six per person. The price indicated covers event package costs only. Other costs including but not limited to transportation, parking, accommodation, taxes and incidental are additional unless otherwise stated. All sales are final and non-refundable and resale is strictly prohibited. Payment must be made using a Chase Credit Card. Package Event details and prices are subject to change. Events are subject to cancellation/rescheduling; you will be contacted in the event this occurs and will be refunded in full for event package costs for any cancellations. Packages are available on a first-come, first-served basis. Availability is limited. Must be 21 years of age or older to consume alcohol. Void where prohibited. Participants agree to release and hold harmless officers, directors, employees, agents, and assigns of Chase Bank USA, N.A. and their respective successors, affiliates, from any and all liability or damage of any kind resulting from or arising from participation in the offer or acceptance, possession, use, misuse or nonuse of the offer. By purchasing this offer, attendees agree to abide by all rules of the events and to conduct themselves in an orderly manner. Failure to do so may lead to expulsion from the event.